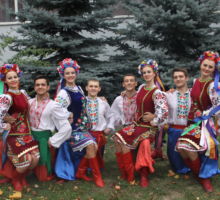 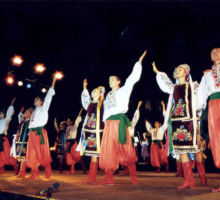 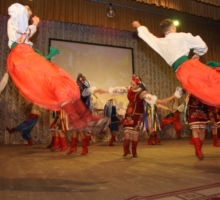 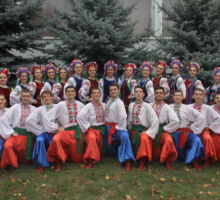 The dance group Yunist Podillya is folk and choreographic collective. Its participants are students, postgraduates, teaching and working staff of Khmelnitsky National University, Ukraine. The mobile ensemble has a wide range of performance experience from large concert halls till small ones, performances on the streets and town squares. The concert program of the group lasts from 10 minutes until 2 hours. The collective Yunist Podillya consists of three groups: a ballet group, a group of soloists and an instrumental orchestra.

The program of the ensemble is based on rich dance and song customs, Ukrainian traditions and rites. The advanced level of skill and professionalism allows the group Yunist Podillya to include in its program various dances, choreographic acts and episodes, compositions and performances. They are performed in traditional and styling Ukrainian folk form. Fiery Cossack dances filled with professional acrobatic tricks, humorous acts from the past of Ukraine change into lyrical compositions and episodes in which beauty, tenderness and dancers` plasticity are shown.

The group is constant participant of different festivals which are held in Ukraine and abroad. Unfailing success accompanied its performances in Belgium, Bulgaria, Byelorussia, China, France, Greece, Italy, Malta, Moldova, the Netherlands, Poland, Portugal, Romania, the Russian Federation, Slovakia, Spain, and Turkey. The ensemble was rewarded with a large number of awards and Ukrainian prizes.

The concert program of the group is composed of rich Ukrainian folklore. It is based on three principle genres: round dances, dances of everyday life and subject dances.

1. Round dances: the dance Pryvitannya (Greeting) symbolizes the ancient Ukrainian custom of guest meeting. So long as a spectator is the most desired guest the whole lyrical round dance with its components – music and choreography – aspires to thrill exactly the spectator and present him the beautiful sight.

2. Dances of every day life: gopaks, kasatchoks and polkas. The main features of Ukrainian character as heroism, love for freedom, ingenuity, liveliness and many others are reflected in these dances.

Gopak is the ancient dance of Cossacks from Zaporizhya region. It is based on improvisation and competition, wide and high jumps, complicated turnings round, acrobatic feats and other tricks are used in this dance. It is important to note that the same or alike devices of this dance were used by Cossacks during their military operations or merry games.

Podilsky gulyanochky (Evening parties of Podillya region) is choreographic composition based on ancient ritual dances. They were widespread in southern districts of Podillya region and connected with traditional Ivan Kupala holiday. In the beginning of each summer during the ancient times Ukrainian youth got together at the bank of the river, performed ritual round dances, arranged merry games with songs and dances. To a certain extent this composition reflects those occurrences.

Polkas: Polka z vykrutasamy (Polka with turns and twists), Vykhylyas (Feat), Podolyanka (Dance of Podillya region), Gutsulka (Dance of Gutsuls, the people of western Ukrainian regions). These dances are of stage type and differ by their subject elements. The principle of competition is used in them: who will make the best `vykrutas` (turn or twist), who dances merrier than the others, who is the best guy and so on.

3. Subject dances. They are the brightest stage items where concrete occurrences from the life of the Ukrainian nation in XVII – XIX centuries are shown by means of folk choreography. In compositions of this type one can see, thanks to the dramaturgy, the logical development of the subject line. For instance, the subject line of the novel Night before Christmas by Mykola Gogol is the basis of the choreographic line in the item Christmas games. Here Ukrainian den is shown, that is theatrical performance in masks.

Choreographic pictures and miniatures How the Cossacks were walking from the fair, How the gossipman was flirting with a gossipwoman, Dolls, Matchmaking are composed in a comic way and they reflect the funny situations from the life of Cossacks, countrymen and Philistines in XVII – XIX centuries in Ukraine. The principal content of these dances is expressed by pantomimic and illustrative means, also by dance motions, which are inherent to Ukrainian folk choreography.

The ensemble performs all concert items in appropriate stage costumes. In certain dances such special attributes as Cossack pipe, masks, lances, sabers, cudgels, guns etc. are used. All this emphasizes not only national colour but to a large extent it helps to understand the dance content and to reveal deeper its most essential sides.

The concert program also includes folk instrumental music and ancient folk songs as Oh, I know that I have got the sin, A nightingale sings, Oh, girl, the grove is murmuring, A Cossack was walking over the Dunay and other. They demonstrate by means of folk music and vocal heroic past of Ukraine, dramatic nature of fortune, love and joy. All this is closely interwoven with Ukrainian benevolent humour.